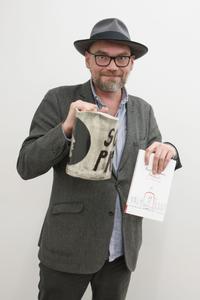 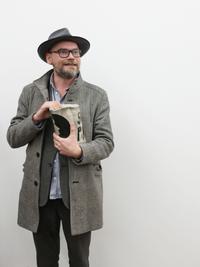 A handwritten tale about a dying father and an Egyptian sun god was honored by Krabbesholm Højskole and Jyllands-Posten. At an award ceremony at Krabbesholm Højskole writer and translator Harald Voetmann was given the Schade Award 2018 for his work “Amduat – en iltmaskine” (Gyldendal 2018).

It was the third time that Krabbesholm Højskole and Jyllands-Posten awarded a writer.

The honored book is an interlacement of two stories. One is about the Egyptian sun god’s journey through the underworld at night. The other is about a father dying of pneumonia at Holbæk sygehus.

In the award speech the jury emphasized the books ability to “transcend death and sorrow across time and space” and praised the writer for “the rare beauty that lies in how seriously the father’s simple, perplexed sentences are taken, and the tenderness of these sentences spoken by a thirsty and confused dying father”.

The forty year old writer is educated from Forfatterskolen in Copenhagen, but has also studied latin and translated Roman poems.

In “Amduat – en iltmaskine” Voetmann also draws on the classical forms, as the book is inspired by Egyptian epitaphs written on the graves of pharaohs. The holy text was written in black and red and Voetmann’s book is also handwritten in these colors, which was also pointed out in the speech:

“The text and the graphic creates a rarely seen balance between the sorrowful, the humorous and the solemn and this is why Voetmann is an ideal exponent of how the hand and the spirit dependency on one another.”

The Schade Award is given to a work that connects literature with other art forms. 5 works were nominated this year:

The musicians and songwriters Alexander Weile Klostergaard and Jonathan West Carstensen from the band First Flush were nominated for their lyrics, where some a published in the book “Rosenkammer”.

The graphic designer Line-Gry Hørup was nominated for the self-published book “Blood”: A translation of Rud Broby’s infamous “Blod” from 1922 combined with photographs and archive material.

Writer Olga Ravn and visual artist Lea Guldditte Hestelund were nominated for their co-creation: The exhibition “Consumed Future Spewed Up as Present” at Overgaden, Copenhagen.

But it was Harald Voetmann who was given the Schade Award 2018 for “Amduat – en iltmaskine” which was described by the jury as “educated, but unpatronizing; wise, but fragile; grand, but also wonderfully concrete”

The Schade Award is given out yearly and the winner is awarded a unique ceramic vase and 100.000 DKK generously sponsored by Skive Municipality.

ABOUT THE SCHADE AWARD

The Schade Award is a literature Award with a prize sum of 100.000 DKK donated by Skive Kommune. The Award is established by Krabbesholm Højskole and Jyllands-Posten in 2016.

The Schade Award is an award that honors literature that sprawls into and make use of other media and combine text with photography, sound, video, graphic, visual art etc.

The award is named after Jens August Schade who was born and died in Skive. In Schade’s poetry everything swirls around. From the tiniest to the grandest. Crossing borders and continents, gender and race. Moving between everyday life to cosmos, milky ways and back again.

Schade also made used of different media – drawings, paintings and graphic design among other things – and worked closely together with visual artists such as Asger Jorn and Inga Lyngbye.