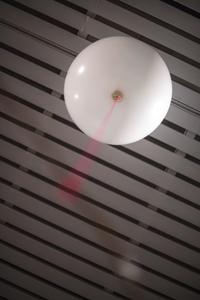 Four Boxes at Krabbesholm Højskole is proud to present a solo exhibition by Peter Bach Nicolaisen. A number of individual art works are spread out over the two floors of the gallery to create an overall environment. Amongst the works are a short slow-motion video of the artists daughter dancing with sparklers in her hands, a simple sculpture consisting of a small twig carried aloft by a helium balloon, and a small romantic painting found at a holiday in Sweden.

As the title suggests it is one of life’s bigger questions, impermanence, which is the central theme of the exhibition. Peter Bach Nicolaisen’s interest has an clear personal starting point as the exhibition includes several direct references to his own life. At the same time, however, the artists use of classic motifs – the child, nature, beauty, death – opens up the exhibition and makes it more universally human. Despite the sombre subject matter Peter Bach Nicolaisen employs a gentle and sometimes playful approach, which allows the audience to interpret for themselves the precise meaning of the metaphors. The simple appearance of the works makes it possible also to experience them as abstract spatial elements, instead of only placing the artists psychologised self as the existential core of the exhibition.

Peter Bach Nicolaisen is an art teacher at Krabbesholm Højskole. He graduated from the Royal Danish Academy of Fine Art and works, amongst other things, with sound under the pseudonym Stormhat.