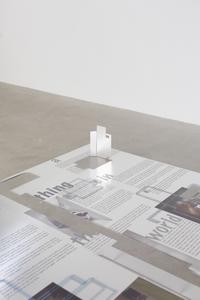 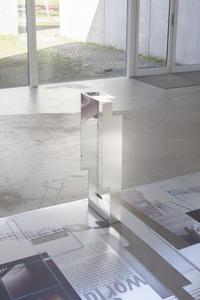 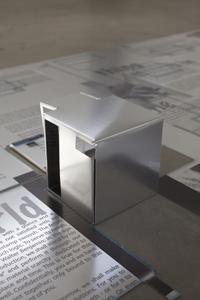 The exhibition deals with the theme of the art exhibition itself and consists of two works. “Janus Høm” is a video installation that follows the TOVES member Janus Høm’s preparations for his separate exhibition at the exhibition site 1857 in Oslo. In its form it reminds the audience of a documentary and sometimes paints an almost genuine portrait of a young artist. A Thing in the World, which has also given the exhibition its title, is a work consisting of a document with images of the exhibition in Four Boxes. The document has been flatbed printed on large aluminum plates, which afterwards have been CNC milled into shapes that can be folded to scale models of the exhibition building. The document’s text revolves around the importance of an exhibition documentation. Where this type of dissemination has traditionally pointed back and stood in a representative relationship with the earlier event, the relationship today may have reversed. As the Instagram mem “pics or it did not happen” suggests, actions are not approved before they have been documented. A Thing in the World problematises this strange relationship where the image comes paradoxically before it depicts.