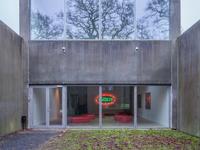 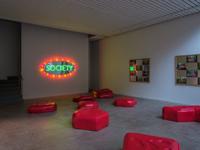 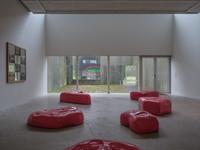 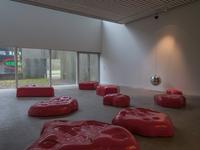 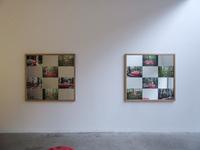 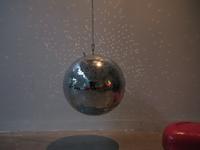 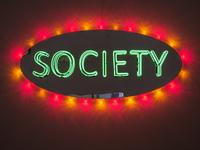 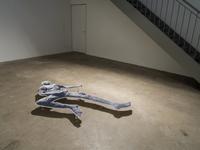 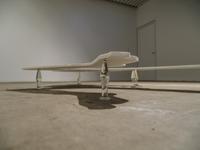 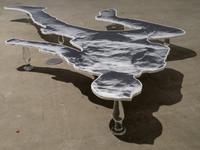 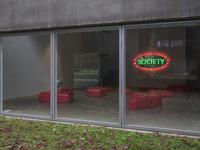 In connection with a workshop at Krabbesholm, Esben Weile Kjær discovers Yvette Brackmans sculpture ‘Camp’, and with the over 25-year-old work as the focal point, they agree to do an exhibition and a spectacular collaboration.

‘Camp’ was created for Krabbesholm in 1999 with a performative aim to be used by a group of students who at the time agreed to perform naked in the woods on bright red ‘stones’ made of polyurethane, flamingo and foam, and in which the students’ body imprints are left as fossils, as part of the work’s narrative of sexuality – about how we form and reproduces ourselves.

In ‘Anxiety of Influence’, the artists meet for a dialogue about the work ‘Camp’ and what would happen with students consent‘ today. The exhibition is also a dialogue between the two artists’ practices. What happens when Yvette Brackman‘s bright red fossils with naked body imprints from 1999 are put together with classic elements from Esben Weile Kjær’s practice such as mirrors, neon and disco lights that mimic youth and party culture? With their respective works 'Camp’ and ‘Society’, Yvette Brackman and Esben Weile Kjær opens the conversation under the light of the disco ball.

The disco ball, ‘Sun’, sheds light on the joint work ‘Mirror Play 1 and 2’. Here, photo recordings from the construction of ‘Camp’ in 1999 are put together in a pane pattern where pieces of mirror glass cover the faces of the naked students and provide the necessary anonymization. At the same time they point to the exhibition‘s’ nervous’ field of interest – what influence and commitment do you have as an artist when depicting other people in your art, and does a consent have an expiration date?