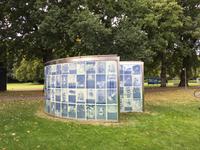 On October 2nd Krabbesholm has opened Dan Graham’s new pavilion for the school: “Chill Out Pavilion”.

Dan Graham has for more than fourty years been an influential figure in contemporary art, working both as an artist, a curator and a writer. His wide variety of work consists of film, video, performance, installation, architecture, women’s magazines and rock music.

An important part of his work has been the design of more than thirty two-way-mirror-glass pavilions in which he has merged sculpture, installation and architecture. They are situated all over the world in parks, museums, on mountains and roof tops.

The pavilions thematize a duality of transparency/reflection and scatter the boundary between observer and observed. Dan Graham is interested in inter-subjectivity, in exploring how a person, in a precise and given moment, perceives himself while at the same time watching other people who in turn are watching him.

“Architects are increasingly interested in the aestetic fascination of Dan Graham’s mirroring pavilion walls. However, Dan Graham does not function simply as an architect. He uses mirroring walls rather as the surgeon uses his scalpel, to reveal the psychological and perceptive structures of our social behavior.”
– Jacques Herzog. Herzog & de Meuron Architects, Basel