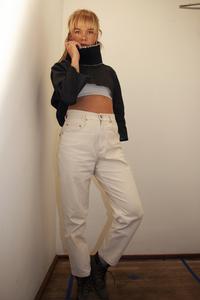 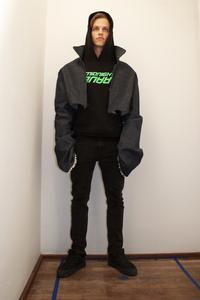 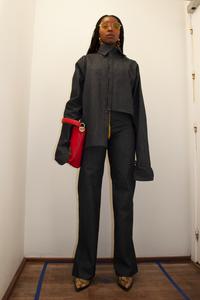 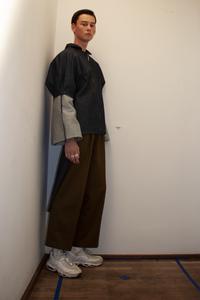 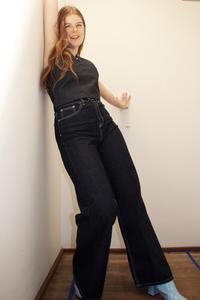 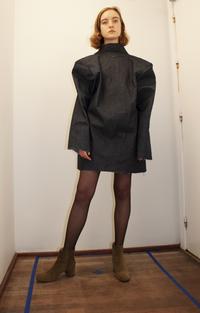 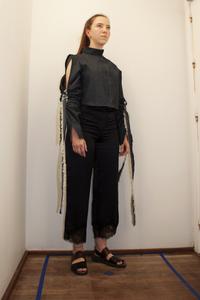 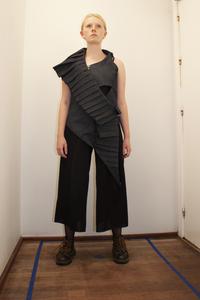 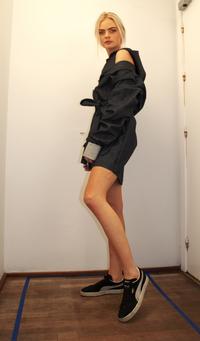 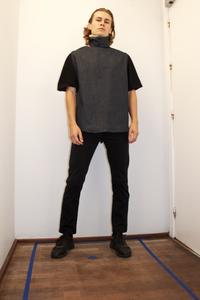 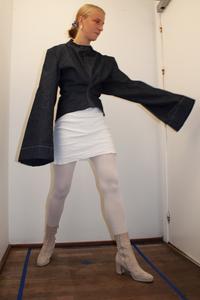 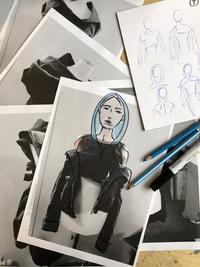 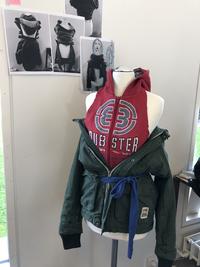 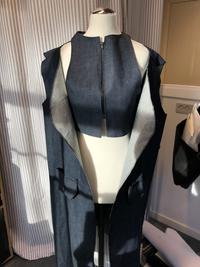 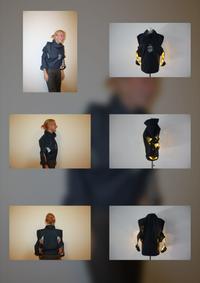 The design students have been working with deconstruction. The of the project aim was to explore how to use already existing clothes as inspiration to create something new.

The starting point for the project was a lot of random clothes, that had been collected from the many locale thrift stores in the area. Clothes that the stores deemed unsellable. The students torn the clothes apart and created new patterns but with clear marks of the original elements. The final designs were created in indigo dyed denim and presented at a fashion show.

“My group got two pair of trousers, which we decided to remake into a top. We used a lot of time to figure out how a leg could be turned into a sleeve. It was really cool to work with denim, because it was totally different than the fabric from the thrift stores. In this way we gained a very concrete understanding about the different fabrics, how they behave and what kind of look they create. We learned so many technical skills in just one week,” says Olivia Sahl, student at Krabbesholm.

The deconstruction project taught students to see new possibilities in what already exists. By using clothes that had been disposed by the thrift stores, the project unfolded a tendency that is gaining ground as a response to the industry’s throw-away mentality; it is cheaper to buy new clothes than to repair the old, but the world’s resources are limited so make sure to use what is already produced!

“Because you had to work with what you had been given, you had to let go of strict ideas about what you wanted to make. You had to create something totally new, but at the same time it had to be somewhat recognizable,” says Helena Baldvinsson, also a student.

‘Deconstruction’ is also a project about identity. Not the fashion industry’s narrow view of beauty and people, but each student’s own understanding of themselves and their bodies.

“The design industry can seem pretty horrible. But maybe we can change it, if we become part of it someday. This project has also helped us to understand that it is possible to challenge the industry,” says Olivia.

With the ‘Deconstruction’ project, the students have created an alternative reality where the focus is not on ideals and demands but on our individual bodies, their beauty and their possibilities.

At Krabbesholm the teaching is about creating something new and unseen that did not exist before you created it.

All in Design …
We use cookies to analyse traffic to the Krabbesholm website. We also share information about your use of our site with our social media, advertising and analytics partners who may combine it with other information that you have provided to them or that they have collected from your use of their services. Cookie policy