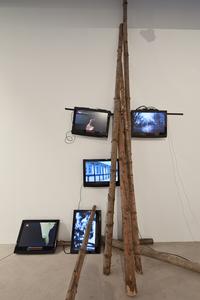 Krabbesholm is delighted to host Michel Auder’s first solo exhibition in Denmark at our new exhibition space Four Boxes Gallery. The exhibition will display new video and photo works by the artist, along with some of Auder’s earlier works never before exhibited in Denmark.

Michel Auder, whose art practice spans over 40 years, was one of the first artists to use video as an artistic medium.

In Auder’s work, the camera both witnesses and directs social exchange. It describes a highly subjective position, moving about his environment, recording its soundtrack, admitting incidental drama, autobiographical detail, and the real-time incursions of broadcast media. In the early 1970s, Auder adopted a continuous approach to filmmaking – constant documentation of the people and scenarios he encountered. As a result, he amassed an extensive archive of video footage, which he uses and reuses in his works. His films collide with narratives in art history and popular memory, and involve artists, writers, and musicians whom he has met over the years.

In conjunction with the exhibition, Krabbesholm will publish a book edited by the exhibition’s curator artist Michael Stickrod. The book will include texts by English writer/curator Michelle Cotton, French filmmaker Brigitte Cornand, and US artist Justin Liberman.

This is the beginning of a new series of Krabbesholm books, which will differ in format from those in the previous series. An abstract of the book will be available online for a short period of time starting February 25, 2010.

Michel Auder will attend the opening, where he will discuss his work and thoughts about this exhibition.