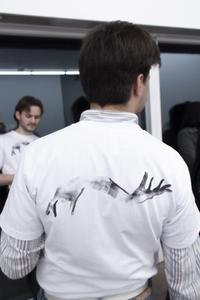 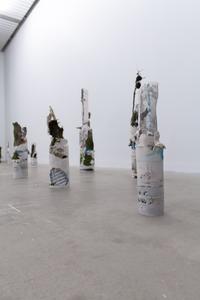 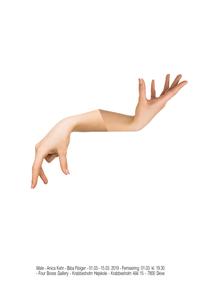 „Mate“ is a duo exhibition displaying sculptures of Biba Fibiger (DK) and Anica Kehr (DK) based on a live chess-match on the opening night determining the exhibitions final outcome. Both artists were invited to produce 16 sculptural works for the exhibition at Four Boxes, that were functioning as stand-ins for chess-figures. Two players had the power over what the exhibition would look like, without actually making any aesthetic decisions. While they battled each other on the chessboard, the objects were moved around the exhibition-space according to the players’ moves and only the sculptures “surviving” the game, would win a place in the exhibition. Instead of collaborating, the works fought each other, simultaneously writing and performing a choreography, engaging in temporary constellations and ultimately removing the other from sight.

Biba Fibiger is a Danish artist living and working in Copenhagen. She graduated from the Royal Danish Academy of Fine Arts in 2016. Her artistic practice deals with questions of language, the (female) body, abstraction and manifests in sculptural assemblages.

The exhibition is the first of a three-part exhibition series at Four Boxes Gallery curated by Gisa Pantel dealing with questions of the “backstage”, hidden power structures, control and hierarchy.