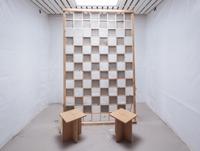 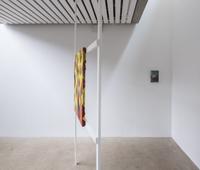 For his exhibition Krisen og en Krise i en Skuespillerindes Liv, titled after an essay by Kierkegaard, artist Jonathan VanDyke from New York City directed ten students in a one-hour, live performance. The students together build a composition using paint, wood, paper, and found materials. In the beginning the stage is clean and white, but it quickly becomes filled with color and constructions. Every few minutes one of the students “interrupts” this process by performing a specific action. One student, for example, performs an exercise routine, while another lip syncs to a Lebanese pop song, and another paints graffiti on the wall. One student sleeps on stage through the entire performance, which ends only when he wakes up.