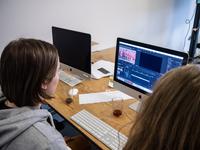 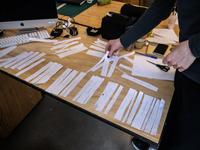 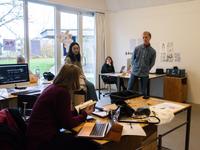 Literature does not only involve novels, short stories and poems. Literature also forms the basis for other media and platforms, like films in terms of screenplays. Therefore, the literature students have been introduced to all parts of a filmmaking process, as they were given the task of making their own short film. The students were introduced to some basic methods on how to write a film script, the classic three-act model and its turning points. During this process, they had to address and contemplate the fact that their texts evolve and change, when they are transformed into moving pictures. In order to generate film ideas, the students were given two obstructions – a Eurovision song, which was to make basis for their script and an object that had to be included in the film. The students made each part of the films themselves – from script writing to editing and casting. Finally, the short films were ready for premiere in the great hall celebrated with a glass of champagne afterwards. Some groups ended up with a result that followed the original scripts, while others, due to various challenges, had to find other creative solutions. The result was three widely different films: The art film “Cyklus” about the female body, beauty rituals and body language, the documentary comedy “Lad det swinge” about love, sex and swing clubs and the thriller “Jeg ser deg, Maja” about the complex relationship between a client and a psychologist.