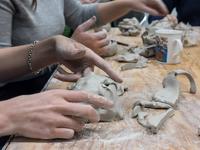 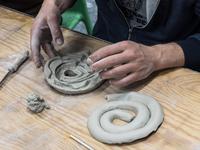 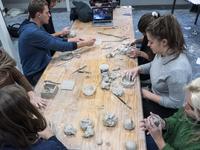 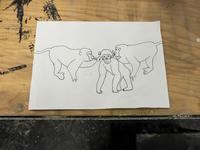 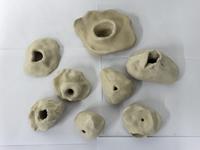 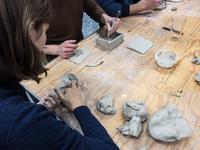 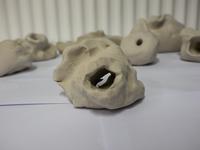 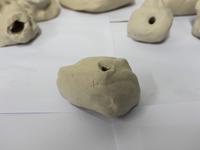 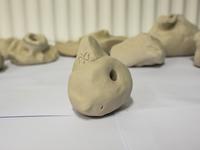 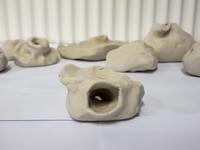 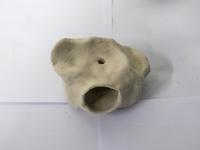 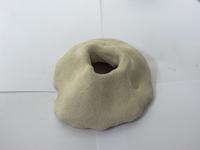 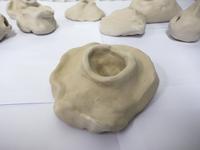 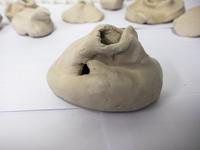 Visual artist Ursula Nistrup and writer Ida Marie Hede visited Krabbesholm Writing Course for four days. The workshop focused on how to approach text as a material in relation to other materials, and thereby challenge both – as well as create new imaginative knowledge from and through the perception of the material. We worked with different stages of the writing process, with improvisation and polyphonic reading and with expanding and changing a text. The students generally worked in groups and with short and improvised exercises.

The students started by taking some time to explore the shape and feel a lump of clay. Then they were asked to describe three attributes or states of being in the clay in a story without a first person narrator. This resulted in some very intuitive and delicately sensed texts.

Later, the students had to sculpt an object in clay based on a picture of a found geological ceramic fragment. They were told that this fragment was found in the forest around Krabbesholm. In groups they were assigned a fictional discipline – eg. zoologist, sexologist or geologist with various bonkers focus areas. The task was then to describe the object’s function, it’s origin and history based on the specific disciplines. We then summoned the students for a conference, and the four research teams presented their theses and challenged each other and history was reinvented.

The final assignment was to shape a cave, or a sequence of cavities in clay. The space could be conceived as an architectural space or a cavity in the physical body. The students were then paired and should describe in words and phrases how the space felt, smelled etc. With a focus on spatial relations, these sensations were then written into a text flow where the language imitated the material object with its rhythms and variations.