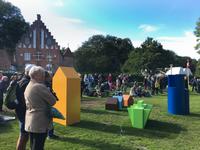 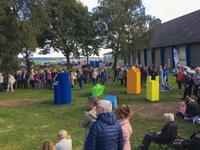 Saturday the 15th of September Skive’s new harbour sculpture was reviled on the occasion of the 150th anniversary of the harbour. “The Giant” is created by former Krabbesholm student Amanda Seibæk. In spring 2019 Skive Municipality issued a competition among Krabbesholm students about a sculpture for the harbour. The requirement has been that the sculpture must be related to the business port or that maritime elements must be included in it. It has been an exciting task for the college’s students, and at the expiry of the deadline, 13 proposals had been received, all of which were commended by the jury for their high artistic quality. After thorough discussion in the judging committee, Amanda Seibæk’s “The Giant” was chosen as the winner. Amanda will now work on her model, so that the sculpture can be set up for the port’s anniversary in September.